Ignorance isn’t bliss, that’s not what we’re saying, but sometimes the sheer volume of political discussion on Facebook can become too much. And for those times, there are plenty of ways to fix the problem. One of the simplest is cunningly titled Remove All Politics From Facebook Chrome Extension.

While there are other similar blockers that do the same job, this is one that actually seems to work in our testing – but even better than that, it’s super-simple for anyone to use. It’s either on or off and there are no settings to configure.

With this, you just need to install it and toggle it on or off when all the political posts become a bit overwhelming. 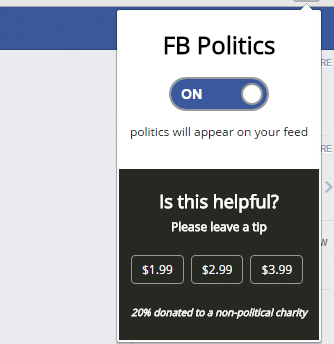 Don’t use it as a way to stick your head in the sand though.

Think your Sky Q remote is broken? Try this before you buy a new one

How to connect a PS4 controller to your Samsung smart TV

How to restore the old @ Twitter replies on Windows and Mac

A really handy free tool for your tech-confused relatives (or maybe even you?)