WowWee, a company that makes robotic toys, essentially, has launched CHiP, a robot dog designed to entertain all ages. I’ve spent the last few weeks living with CHiP to see if he can measure up to the real thing.

As someone who desperately wants a real dog, but can’t have one for various reasons, I was keen to try CHiP out. That’s to say, I really wanted to be impressed by CHiP.

In a nutshell, CHiP is made of a durable plastic (it can take some knocks and tumbles – sorry, CHiP) and is a ‘smart’ and trainable robo-dog. Reward him for behaviours you like via the included wristband or simply have him follow you around. 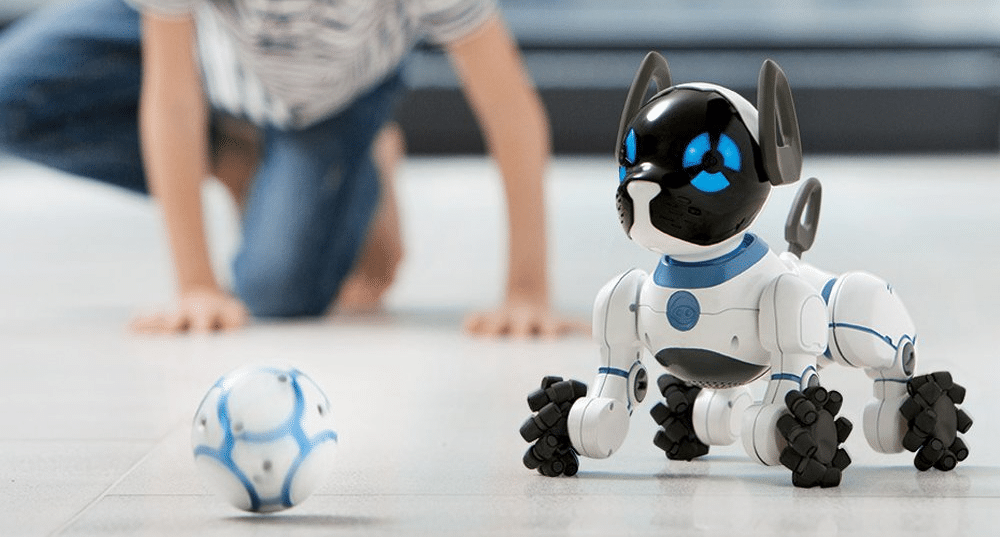 He comes with some pre-set commands too, as you’d expect – like asking him to sit, lie down, dance or ‘do yoga’. You do need to be really precise with the commands though to get him to respond – you can’t just say ‘dance’, you have to say ‘let’s dance’, for example.

CHiP also arrived with a ‘smart ball’ that he can play with, if you so command, and there’s an iOS and Android app for controlling CHiP remotely and changing settings, like the volume of the sound effects, which is one advantage it has over a real dog – you can’t turn down the volume on a bark when you want some respite normally.

While CHiP was fun for a while, the required precision for voice commands to work and seeming lack of ability to do certain things (I never successfully got CHiP to follow me around) meant he ended up cast aside soon enough. It was only when two and four-year-old nephews came to visit that more of CHiP’s potential shone through – they absolutely loved it and immediately started acting towards it as they do real dogs.

The clunky voice commands were a bit too much for them to accurately pull off a lot of the time, but with some help they could fully enjoy CHiP and his energetic yoga poses. When it’s all a bit too much and CHiP needs to recharge, it automatically returns to the charger, which is a neat touch.

As a replacement dog for an adult, CHiP isn’t going to live up to any expectations you may have but for parents with a young family, he’ll certainly keep them entertained for a few hours.